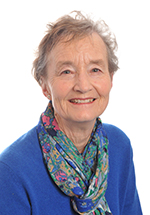 After graduating in Mathematics at Bristol University and gaining her PGCE from Oxford University, Jean Smith worked in five schools both state and independent. Before joining Babington she was, for 16 years, Head of Mathematics and Director of Studies at Bromley High School. During that time she was also an ISI inspector.

“The opportunity to introduce A level Mathematics at Babington House was just too tempting and I am enjoying both teaching and promoting the subject that has entertained and inspired me for so many years”.